Finally I can share this!   You’ve seen some pieces here and there of this quilt,  but what I kept secret is that it was being made as a gift for my mom.  Combination birthday and mothers day gift.  Late for both,  of course!

She’s seen different parts of the progress,  since I was working on it during the sewing retreat I went to where we sat next to each other,  but she never knew I was making it for her.

This is using my Blind Tiles pattern that I am working the details out on.

I couldn’t decide between the teal binding or black,  but then I thought about it and I know my mom loves loves loves bright colors,  so I had to use the teal. 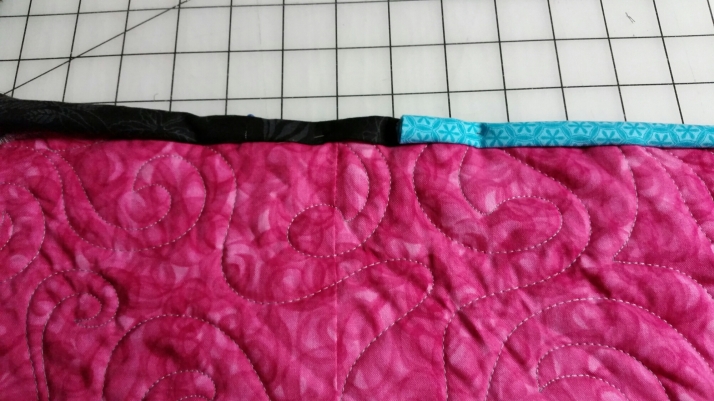 Pixie,  of course,  had to help me with the binding.

Yes… I did the binding with her curled up in the quilt haha.

Hm. I should have gotten some pictures of the quilting.  Sandy did an excellent job,  and even included a special little surprise in the quilting. A little quilted squirrel!  (I’ll see if I can remember to get a couple pictures one of these days).

Even though I got there late (had to work Friday), I managed to get quite a bit done this weekend at the Sew Crazy Sewing Retreat.

I put together the 36 16-inch blocks that’ll become a king size quilt for our bed. They are not sewn into rows yet,  and this isn’t the final layout.  I just laid it out on the floor to show my hubby how the blocks turned out.  This patten is from one of the Turning Twenty books,  the Superman/Superwoman pattern: 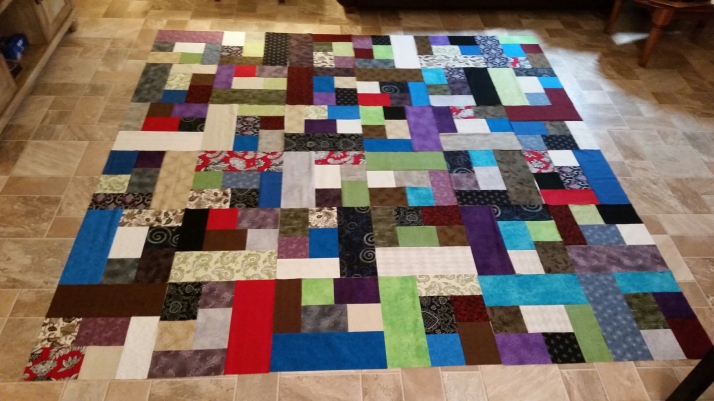 I also put together a 2nd Blind Tiles quilt.  It still needs borders,  but the top is done other than that:

It’s amazing how different fabrics can change how a pattern looks.  The above the same pattern and layout as my greens and pinks Blind Tiles quilt in the next picture.  Looks a lot different doesn’t it?:

The final project I worked on is another design I’m working the details out on.  It’s fairly simple but has lots of pieces.  I’m using (so far) two jelly rolls to make this one:

It was a blast this weekend! We had laughter,  singing,  teasing, some tears, lots of fun,  and the “occasional” cuss word.

Friday the quilter,  Sandy, called and let me know she was done with the quilting on my “pretty little lap blanket”. I met her up at Sew Crazy to pick it up.

I trimmed it and started the binding the same night.  I really wanted to get this one done!  I finished it up on Sunday in the early afternoon.

Miss Penny had to inspect it for me first. 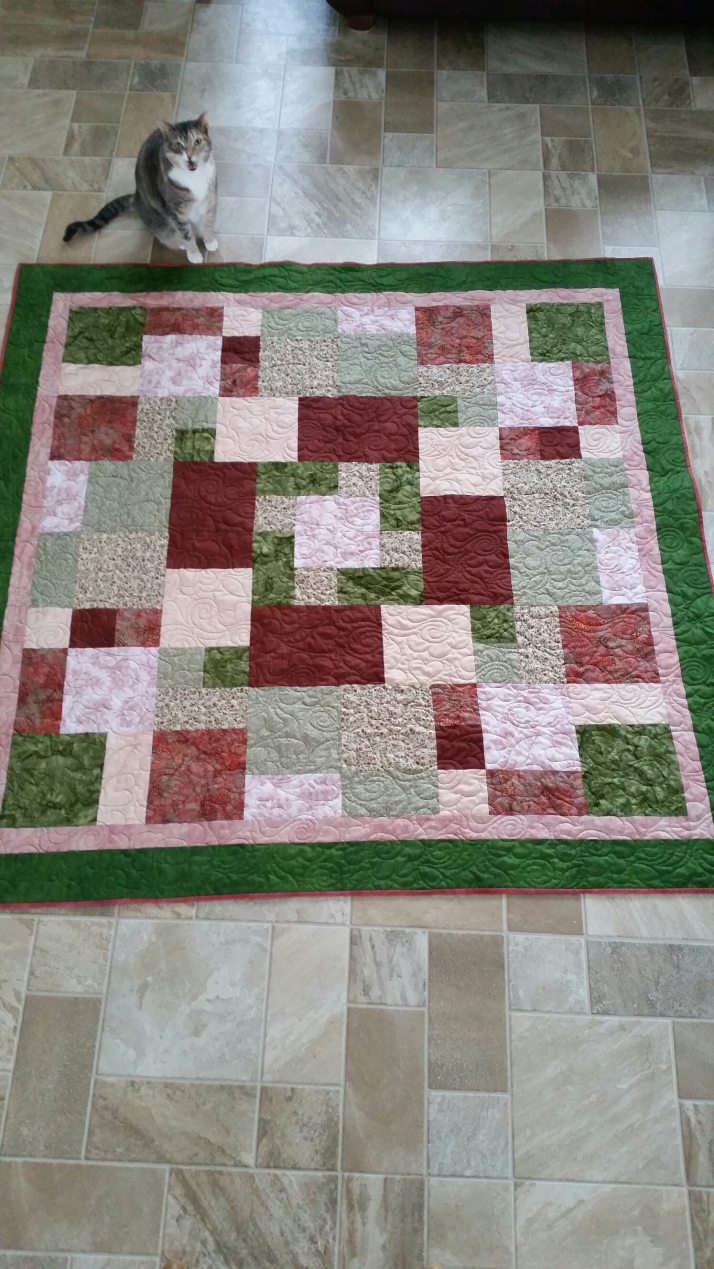 Then immediately after, it went to the next quality inspection,  Miss Pixie. 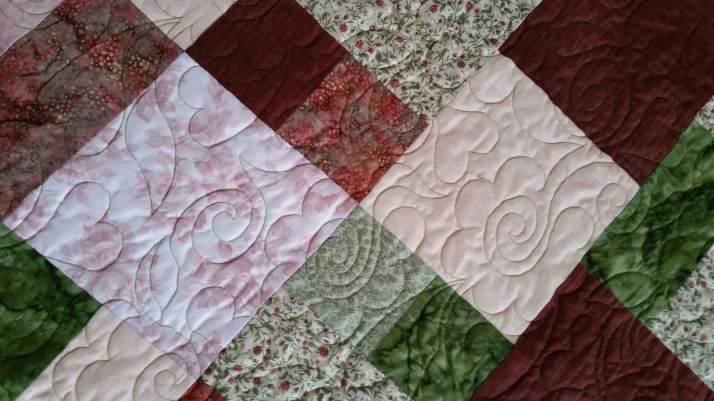 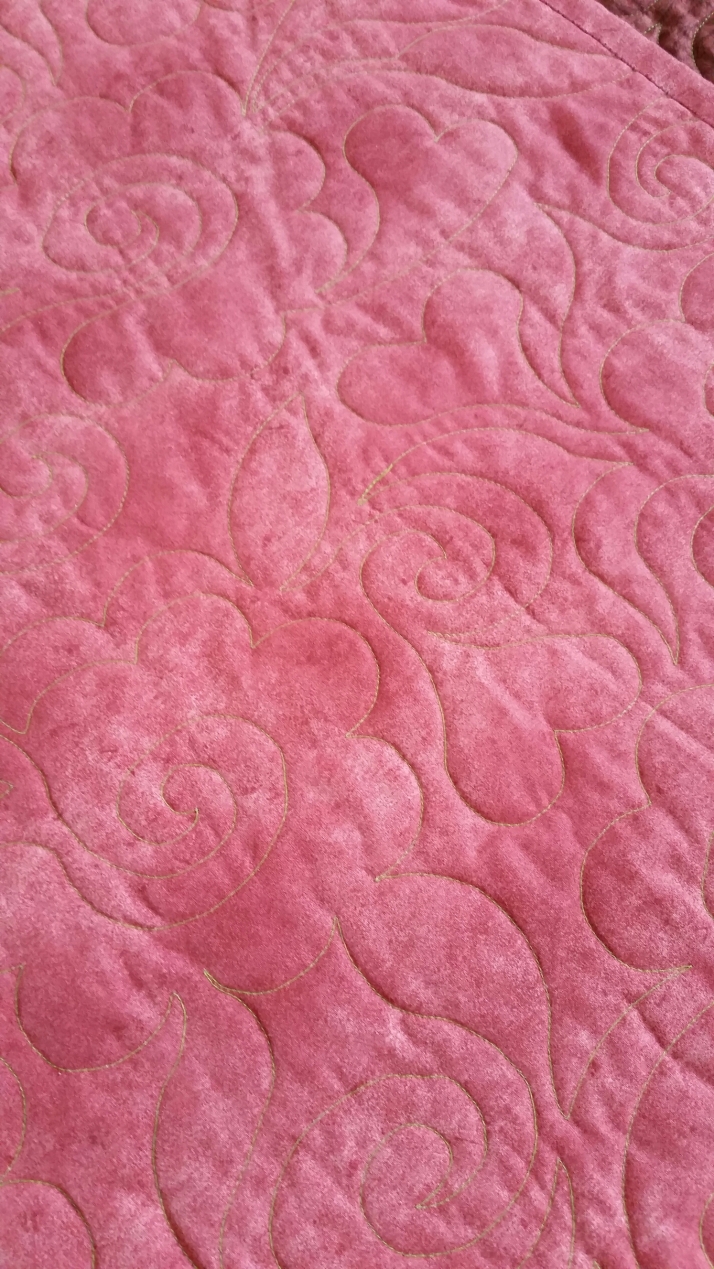 Sandy did old fashioned roses and hearts in the quilting.  I love it!  She read my mind.
When I had sent it to her,  all I said was that I was thinking floral,  maybe roses.  She has a wonderful sense for picking out thread colors and designs. So I want worried about having to give a lot of details for the quilting.

Yesterday we (mostly my mom) picked out the fabrics to make another Blind Tile quilt so I can work out the details for the patterns.

Speaking of patterns,  the Braided Chain placemat and table runner pattern is almost finished.  My testers had great suggestions,  and i just need to finish shrinking the photos to put them into place.
I hope to have it available soon!